TGEU remains concerned about serious flaws in a new gender recognition law which the Greek Parliament has adopted today.  The new law replaces an outdated procedure which, until recently, required that trans persons are sterilised in order to access legal gender recognition.

TGEU welcomes this law as an important first step towards quick, accessible, and transparent legal gender recognition based on self-determination. While the law also introduces and guarantees the right to gender identity and the free development thereof, there are serious flaws which should be addressed immediately.

“Limitations in the law make it fail our human rights test. Having to appear before a judge is contrary to the idea of self-determination. While the requirement to be single forces loving families to be ripped apart. This is cruel and violates the constitutional right to the protection of families.” Says Richard Köhler, TGEU Senior Policy Officer.

Köhler adds “Young people are going to be subjected to pathologisation through a medical commission. Young people also need access to legal gender recognition which is de-medicalised. This helps to combat social exclusion. Young trans people should be celebrated for who they are and not be diagnosed.” 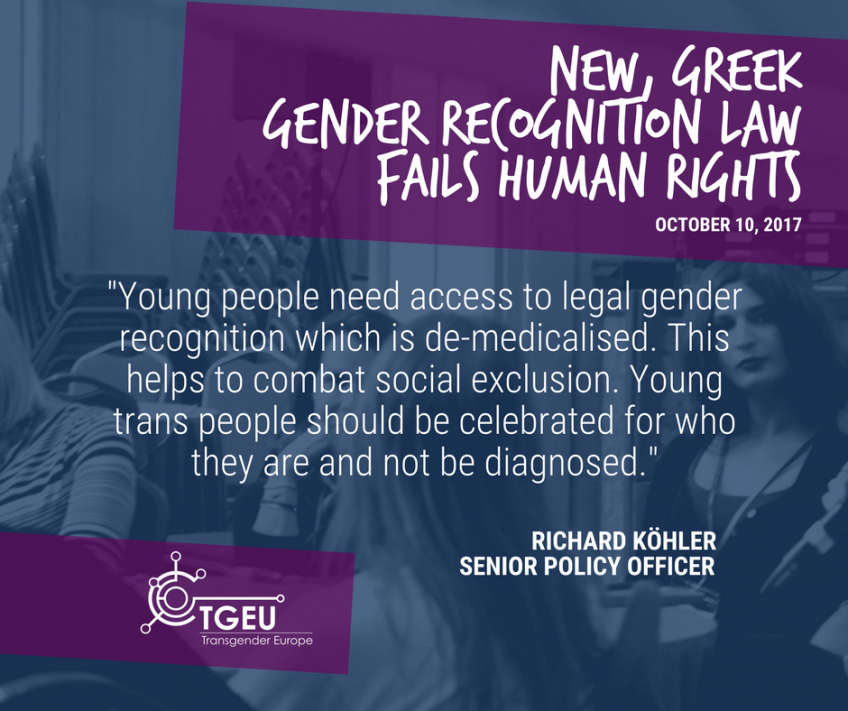 The European Parliament objected to the declaration of young trans people as mentally ill. The Parliamentary Assembly of the Council of Europe asked Member States to ensure that the best interest of the child is paramount in all decisions regarding their legal gender recognition.

TGEU has been supporting efforts of its member organisation GTSA – the Greek Transgender Support Association for a human rights compatible legal gender recognition law since 2015.
GTSA, Colour Youth, Amnesty International, and All Out had collected more than 23.000 signatures to a petition demanding the adoption of an improved law.