On the occasion of the International Women’s Day (IWD) on 8 March, TGEU joins the voices of trans people around the world in denouncing oppression, violence, and hate against women and non-binary people in all spheres of life.

Today we call for the unconditional support of trans women of colour, poor women, non-binary disabled people. We stand in solidarity with women whose wellbeing and lives are threatened by misogyny and sexism, as well as by transphobia, racism, xenophobia, ableism, and anti-sex worker sentiments. We honour the lives of trans women of colour who face chronic worldwide violence, resulting in an average life expectancy of only 35 years.[1] According to the Transrespect versus Transphobia Worldwide project, the majority of trans people reported murdered in the US and Europe are trans women of colour.[2] We call on governments and those in the upper echelons of power to respect, safeguard, and fulfil the rights of all women and gender non-conforming people.

Inclusion matters. Now more than ever, we need to embrace diversity and challenge gender norms that isolate, silence, and perpetuate harm on women and gender non-conforming people. We urge activists and policymakers worldwide to illuminate the invaluable contributions of women including those who are trans and gender non-conforming who are fighting for a safer and equitable world.

To that end, TGEU is sharing the stories of loss, hope, and resilience of two trans women of colour refugees as examples of the challenges faced by many trans and gender non-conforming women. Read, share, and please remember to support the visibility and equality of trans women and non-binary people everywhere, every day. 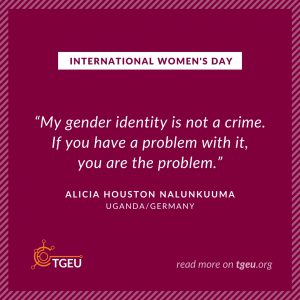 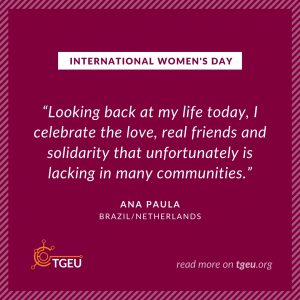 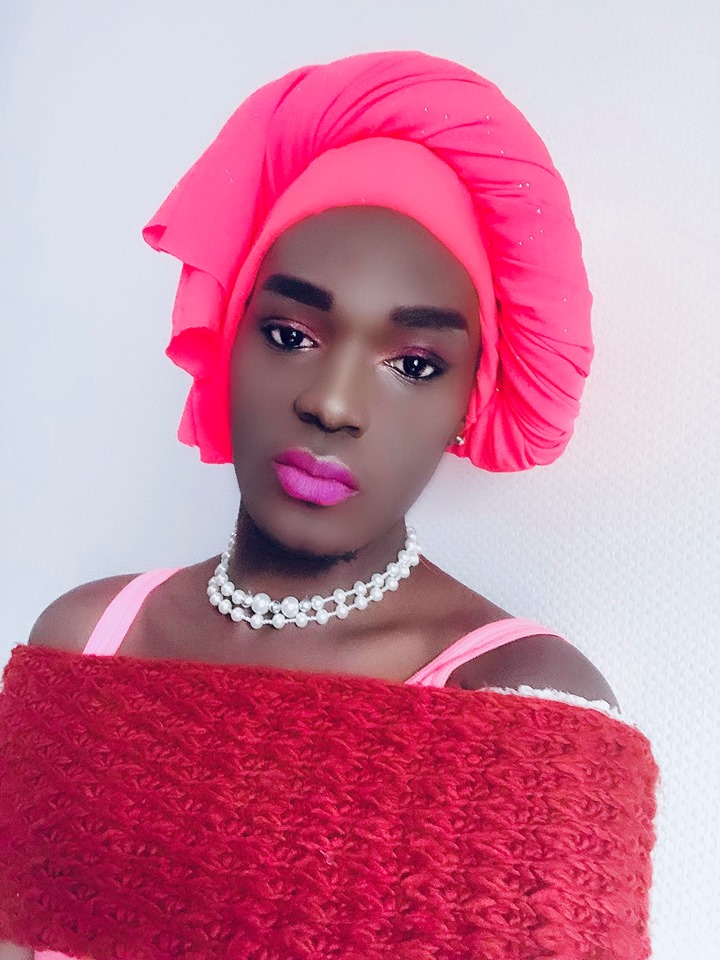 I was born and raised in Uganda, however I have since relocated to Dusseldorf, Germany. Being a human rights activist in generation 2.0, I consider myself a “social media queen advocate”. This is mostly because I harness the opportunities that online platforms avail to call out injustices and to show the world that people like myself exist. I am a 25-year-old, caring, free-spirited transgender woman and my name is Alicia Houston Nalunkuuma.

Being trans online and offline
I believe there are many platforms and ways in which one can be an activist. As minorities, we have to make sure we use all the platforms accessible to us. We have to show that we exist and reshape the negative views people have about us. Whether it’s in arts, music or fashion, the more we are seen and heard, the more people realise that we are also human beings with skills and things that we hold dear like everyone else.

For me, there is no difference, whether online or offline; I portray myself and my life in the same manner. I think some Trans people see the difference in that they are some advantages to being Trans online. They can choose what they want people to see and believe and to some extent, influence what the audience thinks or says about them.

Decision to leave
I am an outspoken person and passionate about human rights. In Uganda, I was well known for speaking my mind and being resilient. I was not only active online but also involved in LGBTQI organisations participating in marches, training and events. I was also Miss Pride Uganda and Promo Queen Uganda between 2015 and 2017. It was both inspiring and humbling to have my fellow activists and community recognise my efforts awarding me with prices for fearlessly taking the lead in championing for the rights of LGBT people in a hostile place like Uganda.

Consequently, this visibility also made me vulnerable to threats and my life was at risk. For me to see another day and continue advocating for our rights, I had to leave my home country. I was living in constant fear, dealing with daily dangers of societal and police brutality fuelled by government and media vitriol. I eventually got tired of this intoxicating trans and homophobic hate-filled country. I also felt I was tired of running, hiding and being in denial. I wanted to live a life where I could fully express myself as a transgender woman without having to conceal my identity in some spaces.

Intersectionality according to me
For me, Intersectionality is the social category of people in gender, colour, class sex and many others. It means our lived experiences and realities cannot be limited to just one group as they are all linked one way or another.

Activism experiences in Uganda vs in Europe
In Uganda, I was just a Trans person, now in Europe, I am a Black Trans person. The challenge is the race issue. Many don’t want to associate with black people they have a way of ignoring and undermining capacities which is both problematic and saddening.

Message to my 15-year-old self
Alicia, everything will be okay its only a matter of time. Believe in yourself because if others can do it, so can you. Pay no mind to what people are going to say about you, stay focused good things await. Put your trust in God because he is the only one who knows you.

Inspiration
I have many people that have influenced me in my life Beyoncé Karungi, Grace Kagere, Richard Lusimbo, Pepe Oziema, Apako William, Keem Love Black, and other trans people that I look up to.

Today I celebrate
That I am still alive, so I thank the almighty for the gift of life.

My life motto
I am a better person than the one judging me. My gender identity is not a crime if you have a problem with it; you are the problem. 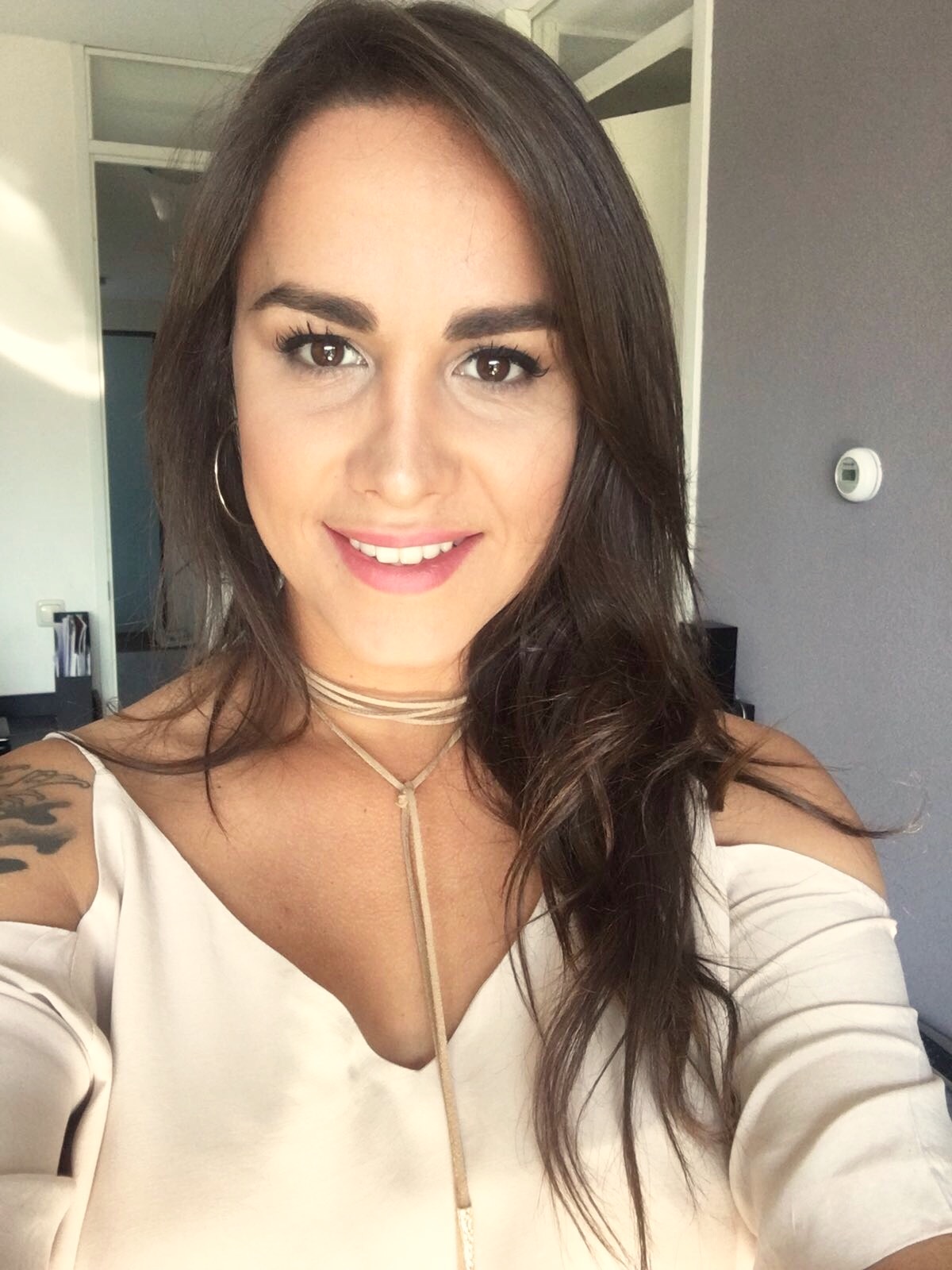 Growing up in São Paulo, I understood the dangers that awaited my life being a trans woman after having encountered rape, incessant violations and discrimination in and outside my home. So, when I turned 14 with the help of human traffickers, I planned my escape, and that was how I fled Brazil. I am Ana Paula Lima. I am in my 30s a transgender binary woman based in the Netherlands.

Influence in life
I started my transition very early, and I did not have many role models. Somehow with the support of my few warrior friends, I managed to pull through. Without any help from the government without any assistance from organisations we survived in South America and still managed to flee and get to Europe alive. Looking back at my life today, I celebrate the love, real friends and solidarity that unfortunately is lacking in many communities.

On being an activist
My activism is very personal; it comes from my experiences having lost friends to HIV/AIDS, suicide and brutal murders. It has been 20 years since I decided to take a stand against the hypocrisy and misogyny that exists in our societies. I have encountered many challenges that made me realise that I have the power to speak out and confront injustices perpetrated by white and cis-hetero privilege.

Activism in Brazil and the Netherlands
There is a huge difference when it comes to how activists organise in Brazil compared to Europe. For example, in Holland, where I live, activists receive support from local and national governments; this is commendable. However, the challenge has been the underfunding of programmes for Trans people, especially of colour. We are now starting to notice a shift for the better as the movement grows stronger. I have lived in Holland for a long time, but I doubt much has changed in Brazil where our trans siblings still have a torrid time. The country is currently experiencing one of its worst political moments. The president is hugely racist, homo and transphobic and most NGOs doing human rights work have to depend on international donations.

Being TPBOC in Europe
In Brazil, I had a rough time. Still, I have come to realise that even here in Europe, I have my fair share of challenges, mainly linked to being a trans woman of colour. Apart from having to face a new culture, learn a new language, I also have to deal with discrimination. The situation is worse for trans women viewed as sexual objects. One of the most significant challenges is securing a job. Majority of trans-immigrant and refugee women living in Europe are still sex workers. I am not saying that sex work is a negative thing, but the fact remains that most do not have a choice. It doesn’t help that there are very few specific social programs and skills development projects for our trans communities.

Intersectionality
It took me a long time to understand what intersectionality was. It’s a significant term; it almost sounds weird and very academic. Most of the time, people use the word without bothering to explain what it is. It means we have to consider different forms of oppression. All oppression is interconnected; hence if we focus on only one type of oppression we intensify and reinforce the other various forms. For instance, Transphobia is sustained by machismo, which in turn is maintained by colonial culture, which generates racism, which leads to inequalities and so the chain continues.

Leveraging intersectionality means, for example, when advocating equal pay we have to include issues faced by a disabled trans woman of colour who may not even have access to the labour market. Without intersectionality, every fight turns into a knife-tipped punch. It becomes isolated, and in the end, we reproduce what we are fighting against.

Message to Trans and LGBT activists in hostile spaces
Do not stop fighting, take care of yourself, raise your head, study, work and do the best for yourself. You are beautiful; you are talented and never let anyone give you away. The problem is not with you but the society that is sick.

A lot is happening worldwide. Tolerance is fading as discrimination rears its ugly head. Racism and hate are now the order of the day, even in public spaces. Once again, as a Latina trans woman of colour who fled to Europe for safety, I sadly no longer feel safe on the streets even in my home. Most of those murdered are mostly sex workers and migrants trans women of colour, that explains my fear. Leaving my door and not knowing if I will ever make it back and seeing the fear in my husband’s eyes too as he also gets worried.

I also think about most Trans persons who are alone, abandoned, and rejected by family and those who have a relationship yet feel unsafe because of domestic violence. These numbers we see are just the ones reported what of those that are unknown, under-reported or unreported in transphobic societies.

In the face of many hurdles, we must never give up. Our siblings’ deaths are not in vain. We owe it to them, to continue this fight for our human rights and equality. Our allies we need you because we cannot do this alone.´