Posted on 12. October 2018 in Work with Institutions, Press, Country Information

In 2018 the Council of Europe is measuring the progress that European countries have made in advancing equality for LGBTQI people. This is the second time this process is happening after the recommendation CM/Rec(2010)5 was adopted 8 years ago. The recommendation established important standards about how discrimination on grounds of sexual orientation and gender identity (SOGI) should be fought. Transgender Europe (TGEU) welcomes this second review on the recommendations, and looks forward to continued political commitment to LGBTQI equality from the Council of Europe.

Since the recommendation was adopted in 2010, there have been significant gains in Europe that have secured legal rights for trans and LGB people. However, the work on equality is nowhere near done. Worrisome backlash on human rights culture, a rising rhetoric of hate, and state-led persecution in a number of states remind us that efforts to combat violence and discrimination on grounds of SOGIESC must be strengthened.

This week ILGA-Europe, TGEU, and Organisation Intersex International (OII) Europe, have submitted a comprehensive report to the Council of Europe. This report, Protecting LGBTQI rights in Europe. Submission to the second review of the Council of Europe Recommendation on measures to combat discrimination on grounds of sexual orientation or gender identity (CM/Rec(2010)5), co-authored by ILGA-Europe, TGEU, and OII-Europe is further endorsed by the International Lesbian, Gay, Bisexual, Transgender, Queer & Intersex Youth and Student Organisation (IGLYO), the European Lesbian* Conference (EL*C) and the Network of European LGBTIQ* Families Associations (NELFA).

The report is accompanied by 16 stand-alone country reports which have been prepared by 11 LGBTQI and 5 trans groups. Between March and July 2018, TGEU and ILGA-Europe supported these groups in drafting the reports which lay out what 16 Council of Europe member states (Armenia, Bosnia and Herzegovina, Bulgaria, Croatia, Cyprus, Estonia, Finland, Georgia, Hungary, Lithuania, FYR Macedonia, Montenegro, Poland, Portugal, Serbia, Sweden) are doing to ensure LGBTQI equality.

The report measures progress across all the areas of the recommendation, from right to life and right to seek asylum to housing, health and sports. European and international human rights standards have significantly evolved in the past eight years, and the report also reflects these new benchmarks for LGBTQI rights in each area.

Among its key findings the report signals the legal measures against discrimination and violence that are in place in the vast majority of Council of Europe member states. The implementation, on the other hand, continues to be insufficient, leaving LGBTQI people vulnerable against discrimination and hate crimes. The legal measures against violence and discrimination are still most often only inclusive of sexual orientation. While gender identity has been increasingly included over the past years, gender expression and particularly sex characteristics are very rarely included. Where the implementation is insufficient, it is often civil society that tries to fill this gap. In a number of countries the NGOs provide support services for hate crime victims, collect data about cases of violence and discrimination and hold trainings to judiciary, law enforcement and healthcare professionals.

Read the country reports and the joint submission here: https://tgeu.org/coe-recommendation-2018/ 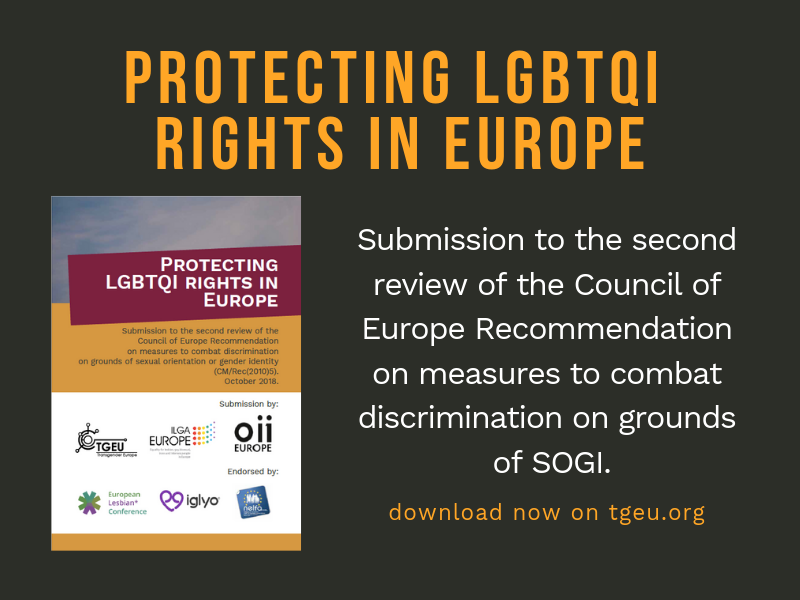