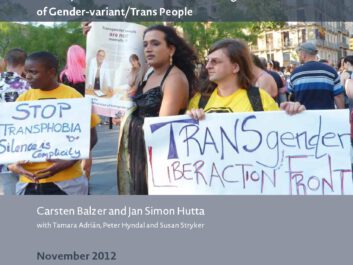 Transgender Europe’s Trans Murder Monitoring project reveals 221 killings of trans people in the last 12 months In total, since January 2008 the murders of 755 trans people have been ...

Trans Murder Monitoring unveils interactive map of more than 600 reported murders of trans people since 2008 On 17th May, The International Day Against Homophobia and Transphobia (IDAHOT) is being held in ...

Every 2nd day a murder of a transgender person is reported

TGEU research shows: every 2nd day, a murder of a transgender person is reported.   The TGEU research project Transrespect versus Transphobia finds an alarming trend. On Sept 14th ...

15. September 2010Every 2nd day a murder of a transgender person is reported

TGEU research: In the last 3 years the murders of more than 500 trans people have been reported

19. March 2010TGEU research: In the last 3 years the murders of more than 500 trans people have been reported