Posted on 26. June 2020 in Campaigns, Creating Change, Work with the Global Community, Press, Our global work

On Pride month, TGEU joins the global call for racial justice and demands an end to racial violence and police brutality.

Today, as many Black trans people lose their lives to police brutality and structural violence, silence is a luxury we cannot afford. We can no longer remain spectators; the struggles for racial justice and trans liberation are interconnected. May we be reminded that if any amongst us are affected, we are all impacted.

TGEU wishes to centre the voices of Black trans people and go back to the origins of Pride. The Stonewall riots in 1969, mainly led by LGBTQ+ people of colour such as Marsha P. Johnson and Sylvia Rivera, were about resisting police brutality and oppression. Fifty-one years later, many Black trans lives continue to be cut short by institutional and police violence.

Globally, police brutality remains a significant threat to the safety and lives of many Black trans people. TGEU demands robust commitment and immediate actions by states to end racist, discriminatory, and violent structures that fortify the oppression of Black trans people.

We call upon our non-Black communities and allies to move beyond embracing intersectionality as a principle and to join efforts in fighting to end and condemn white supremacy. There is a need to do self-analysis and commit to concrete actions against racism, prejudice, and violence in our homes, societies, and communities.

We also strongly urge non-Black activists and organisations to advocate for racial justice and for an end to the culture of racist hate and structural violence. We encourage the support of wellness and safety of Black trans people, including clear action plans and support structures for the most vulnerable communities such as Black trans women and trans youth who are disproportionately impacted by COVID-19.

As we celebrate Pride, we also celebrate the resilience of Black people everywhere. TGEU expresses solidarity and support to all Black trans lives.

Let this Pride month be a reminder of the sacrifices and resilience of Black trans communities. May we continue to draw inspiration from their acts of defiance against police impunity and repression. There is no justice unless and until we are all free. 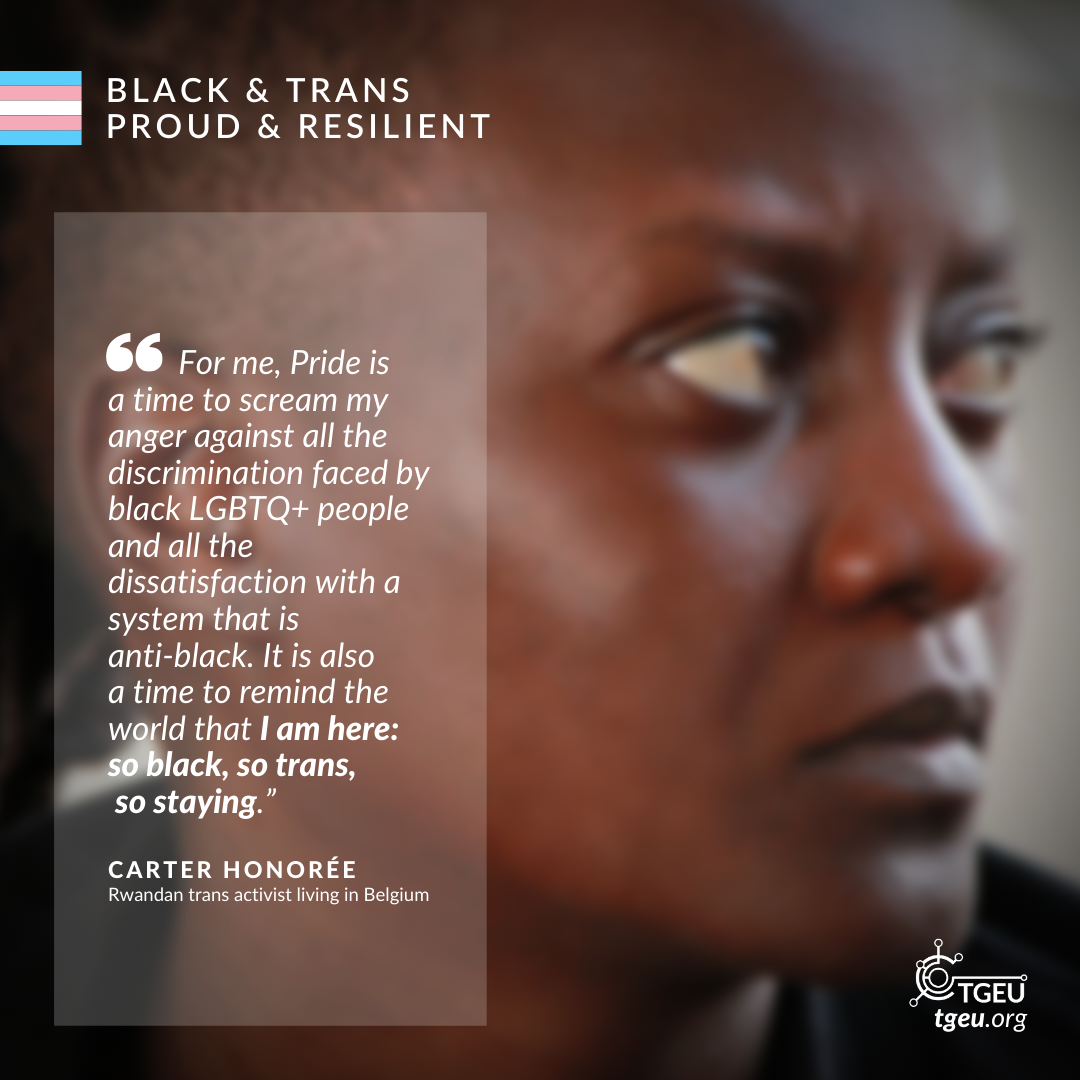 My name is Carter Honorée. I am a Rwandese Black trans activist and have been involved in the LGBTIQ community since 2008. In 2019, after facing violence and persecution in Rwanda, I sought asylum in Belgium, where I currently live.

I have been brutalised by the police back in Rwanda for being a trans person, ran away to find refuge in Belgium, and realised that the colour of my skin poses a huge additional threat. It terrifies me to have to survive as a Black trans man, soon perceived as a Black cis man, in an anti-Black-trans system. The racism and disrespect, even in queer spaces, deeply affect Black trans minds and bodies. We start losing a sense of belonging and finally believe to be good for nothing. It is extremely exhausting to have to constantly look over my shoulder, to live on the defensive, because of the colour of my skin.

For me, Pride is a time to scream my anger against all the discrimination faced by black LGBTQ+ people and all the dissatisfaction with a system that is anti-black. It is also a time to remind the world that I am here: so black, so trans, so staying. It is a time to mourn, remember, and celebrate the ones who left us and the lives of the ones that are still fighting. It goes beyond police brutality and racism. The discrimination Black trans people face for seeking healthcare, jobs, homes; the murders that happen every day: those don’t get media attention and justice is never done. I hope we can use this year’s Pride to give light to issues that have been shoved aside and that are killing trans people all over the world. You can run away from a violent environment, but you can’t run away from what it did to you.

Pride would have never been possible without Black trans women who gave voice to the voiceless. Pride needs to go further than white queer people dressing up, dancing, and taking pictures. White queer people who despise Black queer people and do not allow them in their circles of leadership. White people with a performative allyship, who scream about Black lives matter, but don’t promote our work, don’t hire us, and use our experiences and then appear like saviours. We don’t need white saviours.

I am Jaqueline Gomes de Jesus. Born in 1978, I am Professor of Psychology from the Federal Institute of Education, Science and Technology of Rio de Janeiro (IFRJ), in Brazil.

In 2010 I got PhD in Social Work and Organizational Psychology at the University of Brasília (UnB). In 2014 I completed a Post-Doctorate at the School of Social Sciences of the Fundação Getúlio Vargas (FGV) in Rio de Janeiro. I was the first manager of the Affirmative Actions for Afro-Brazilian Students at UnB, as Advisor for Diversity and Support for Quota Holders and Coordinator of the Black Convivence Center from 2004 to 2008. I was president of different LGBTQ+ Non Governmental Organisations. I am a Black trans woman.

As a writer and researcher, my intellectual production is not fully recognised, or even not correctly referenced, although I have almost a hundred publications, including original scientific articles, chapters, and books related to social psychology, social movements, slavery in contemporary Brazil, affirmative actions, gender, and sexual orientation.

Pride for me is, firstly, constant resistance in opposition to the reiterated attempt from this historically-racist LGBTQ+phobic system to foreshadow my existence and thought with shame. As it tries to shut me up, I keep screaming, especially with my writings.

As a Brazilian queer child of colour who grew up in the outskirts of the capital, I am a survivor. I faced anti-Blackness and police violence. I was repressed and had my life threatened many times. But I kept myself alive and worked hard, hoping for changes. I think this year’s Pride focus is an answer to the debt of the LGBTQ+ movement on looking over our pledges and fighting, almost alone, throughout the globe!

I want a world where a woman like me can grow up loved, no matter our colour or gender identity, and that we may think and research on whatever issue we want without being labelled or having our intellect underestimated solely based on prejudice. 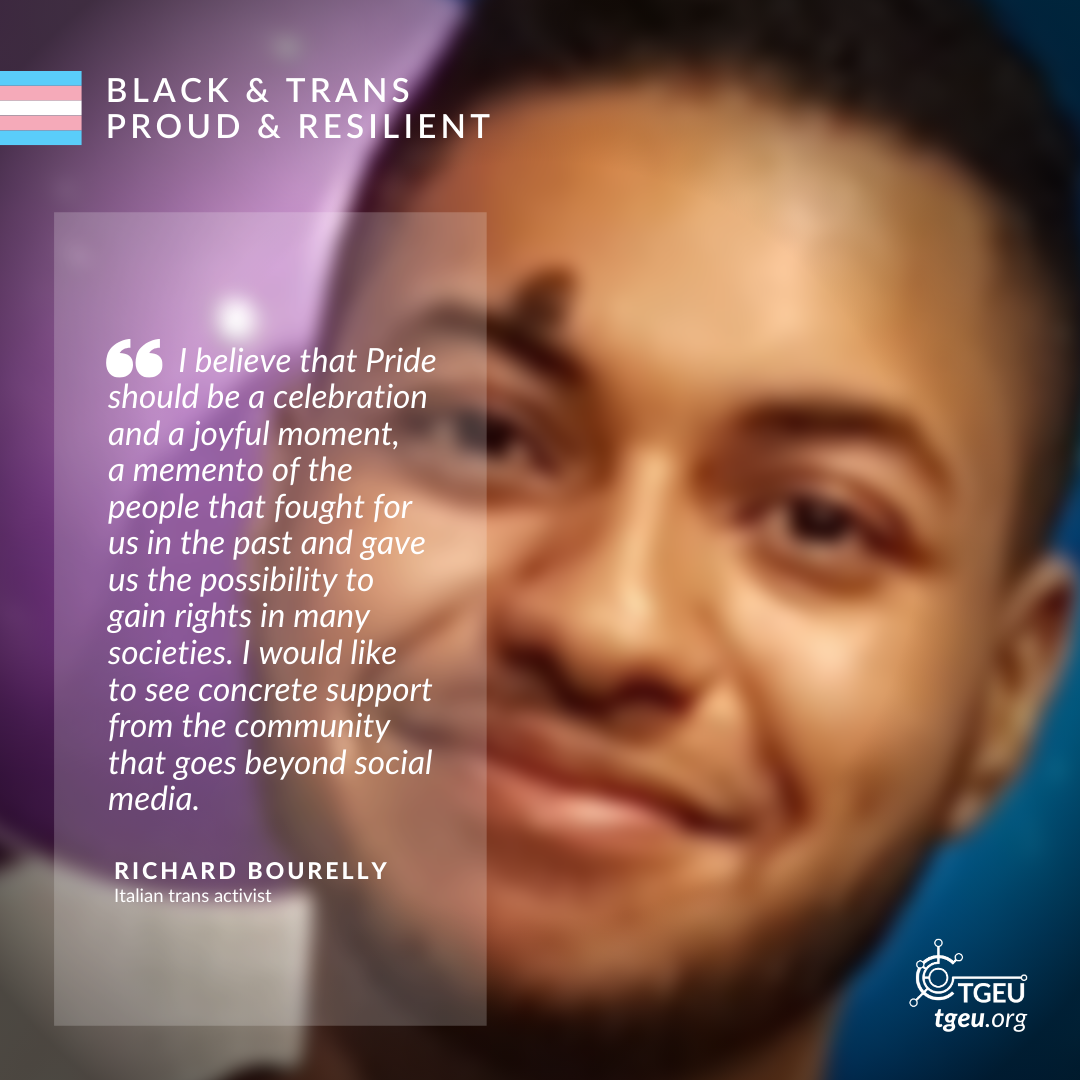 My name is Richard Bourelly and I am a 25-year-old transgender activist from Italy. In the last five years I have been the landmark for the Italian trans community on YouTube and I’m part of two transgender associations: Action Trans as the president and Gender X as the vice president.

Since I have had the possibility to change my documents in 2017 it’s rare for me to face discrimination as a trans person. The only instances have been by the medical staff during my check ups after my hysterectomy and from the headmaster of a high school where I was invited, by the students, to speak about trans rights, but in those instances I do not believe that my skin color was taken into account. Although, since I started my transition I have been stopped by the police and the military many times since they do not see me as an Italian because of my skin.

Pride is a moment to celebrate our existence as LGBTQIA + people and to show the world that we exist. I believe that Pride should be a celebration and a joyful moment, a memento of the people that fought for us in the past and that gave us the possibility to gain rights in many societies. At the same time, Pride is a way for many countries to demand those rights from their government.

I believe that focusing this year’s Pride on resisting anti-Blackness and police violence around the world is a wonderful idea. I would like to see concrete support from the community and not just some inspirational phrases on Instagram and other social media.

I would love to see a world where everyone would mind their business and let us live our life as we wish. 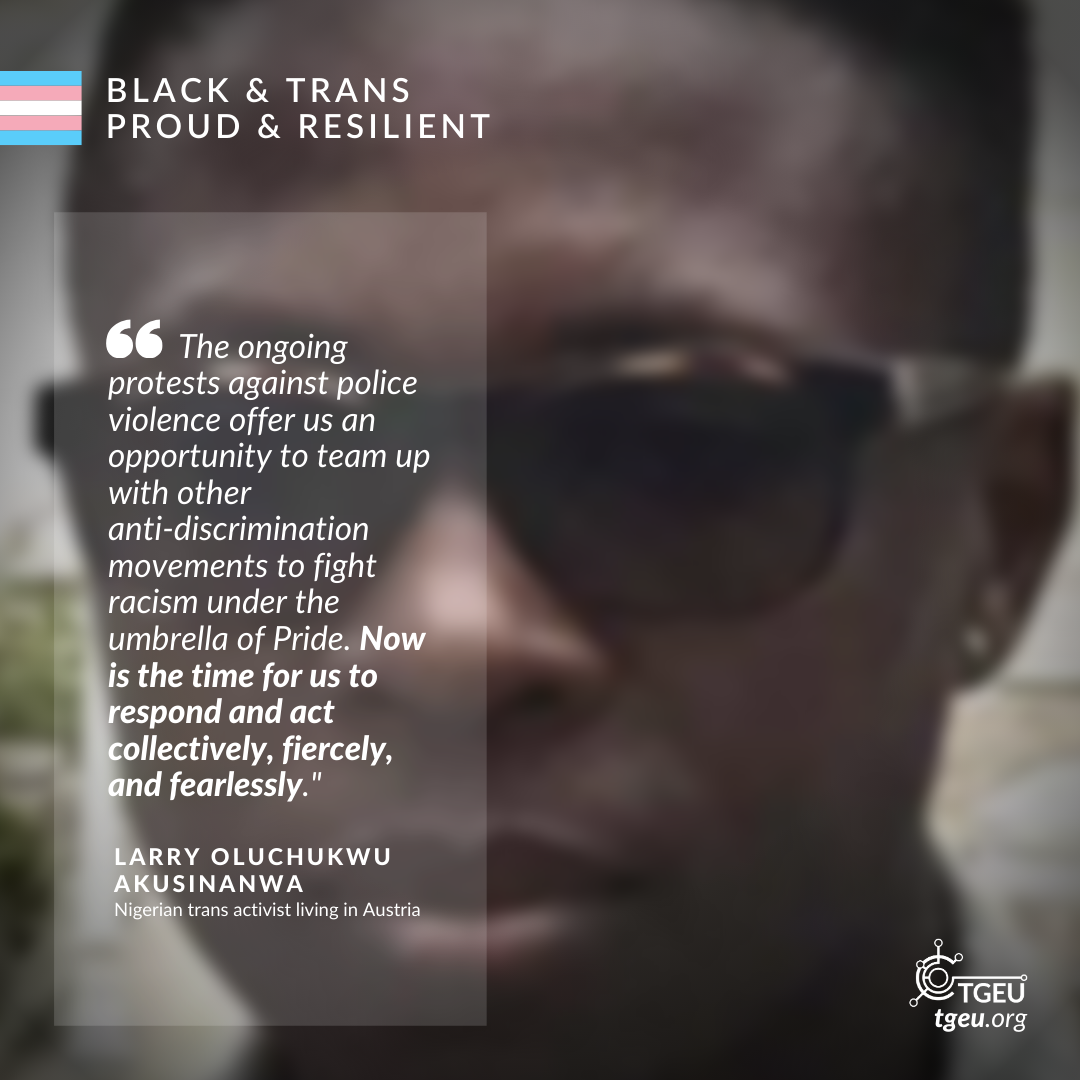 My name is Larry Oluchukwu Akusinanwa. I am a Nigerian trans man living in Vienna, Austria. I am a co-founder and vice chairman of Queerbase Austria and Board member of Afrorainbow Austria.

It’s not easy being Black and, worst still, a trans man in this country. I have been controlled a couple of times by Austrian police, mostly while sitting quietly and peacefully in a park or reading a book. The way they look at you on the streets as if it is not possible for them to stop you would make you feel you are treading on forbidden ground.

Pride is a community event and a safe space for me. I look forward to always connecting with my kind; I call it family.

Anti-police violence is a worldwide outcry and Black LGBTQ people are mostly targeted. Now is the time to team up with other anti-discrimination movements to fight racism under the Umbrella of Pride. This is our call to answer collectively, fiercely, and fearlessly.