Posted on 25. May 2020 in Legal Gender Recognition, Press

On Tuesday 19 May 2020, the Hungarian Parliament voted in favour of a bill that outlaws Legal Gender Recognition for trans people. TGEU firmly condemns the bill for violating trans people’s right to gender recognition, denying them the right to private and family life, and going against international human rights standards.

The bill hasn’t passed yet; there is still time to stop it! We need the support of the whole trans community in Europe, Central Asia, and beyond. We urge allies and trans communities to call upon the European Union to strengthen their efforts in denouncing this action by the Hungarian Parliament and urge the President and Government of Hungary to respect the human rights of trans and intersex people. The fastest the response, the better, as the bill will be signed before this Friday, 29 May. We strongly encourage you to support this call for action even after the law is fully passed. We can still make a difference!

How to support the trans community in Hungary?

TGEU drafted a template of letter (see below/download in .doc or in .odt) to be sent to your Ministry of Foreign Affairs (MFA) and Ombudsperson (or Commissioner for Human Rights or any other equivalent). We encourage you to translate it in your national language(s) and send it to them asking for support. The goal is that they reach out to the President of Hungary and to the Hungarian Commissioner for Human Rights, respectively. To join the campaign:

Share images on social media and use the hashtag #LGRforHungary. You can also use our “Protect LGR now” frame on your Facebook profile photo!

While the most marginalised trans communities are among those most impacted by the COVID-19 crisis, some governments are using the pandemic as an excuse for violating trans people’s human rights. We will not let them. Our action counts! 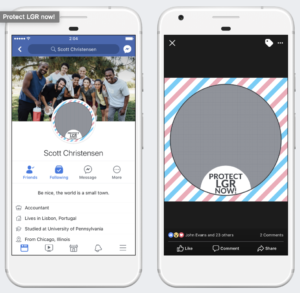 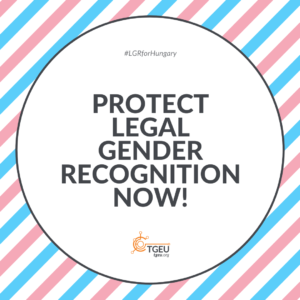 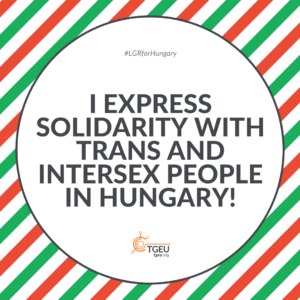 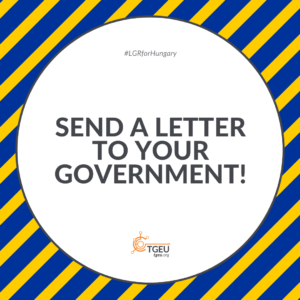 This letter, on behalf of _____(organisation)_____, brings to your attention a concerning bill that was passed by the Parliament in Hungary on 19 May, as it contravenes EU and international human rights law and violates the well-established right to private and family life. We ask you, as the _____(name of institution)_____, to contact the Hungarian (President/ Commissioner) to call on them to refer the bill to the Constitutional Court for Review.

The Hungarian government on Tuesday, 31 March, released a draft omnibus bill simultaneously amending many laws and provisions. One of the laws proposed for amendment relates to legal gender recognition for trans people – proposing to replace “sex” with “sex assigned at birth” in the national registry and on identity documents, as cited in Article 33 of the bill. As a result, the category will be unchangeable in all identity documents and trans and intersex people will not be allowed to have their gender legally recognised under any circumstances.

This bill is not only a setback for the rights of trans and intersex people, but it exposes them to further discrimination and violence in an already hostile environment. In addition, it poses a threat to the exercise of further rights such as access to health, education or the labour market. It excludes them from their full participation and contribution to society.

The European Court of Human Rights (ECtHR) establishes a positive obligation for European states to provide legal gender recognition (see [B v. France, 1992] and [Christine Goodwin v. the UK, 2002]). Also, the ECtHR has repeatedly ruled on gender identity recognition and its conditions, strengthening the human rights of trans people, namely private and family life, the right to a fair trial and the right not to be discriminated against.

The Hungarian Constitutional Court made it clear that changing name and gender is a fundamental right for transgender persons (see Court’s decision 58/2001-XII. 7.). Local trans and LGBTI organisations in Hungary consider this law unconstitutional and have requested the President of Hungary, János Áder, to send the bill to the Constitutional Court asking for preliminary norm control.

Numerous institutions and organisations have unsuccessfully addressed the Hungarian government and Parliament, including the Council of Europe Commissioner for Human Rights, the European Parliament, the United Nations Special Procedures, and others.

We ask you to condemn the actions taken by the Hungarian government and to address the President of Hungary / Commissioner, express your concern and encourage them to send this bill to the Constitutional Court for further review. The respect for fundamental rights and European values are a shared responsibility within the region, and we look forward to your support in ensuring trans people are recognized and protected in Hungary.