About the Trans Rights Map & Index

The 2019 Trans Rights Europe & Central Asia Map highlights the forced sterilisation of transgender persons and the requirement for a mental health diagnosis in gender recognition procedures in Europe and Central Asia. 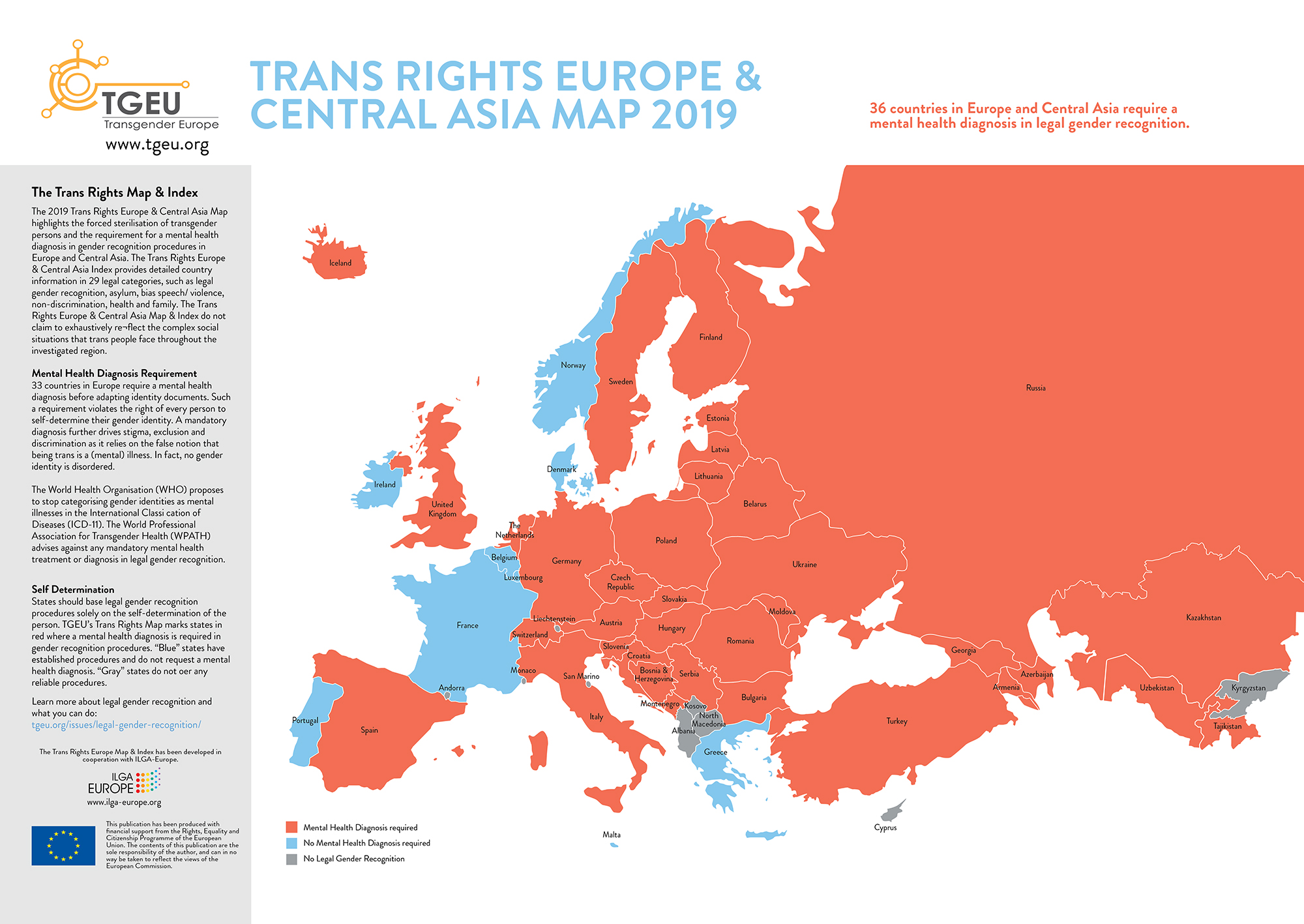 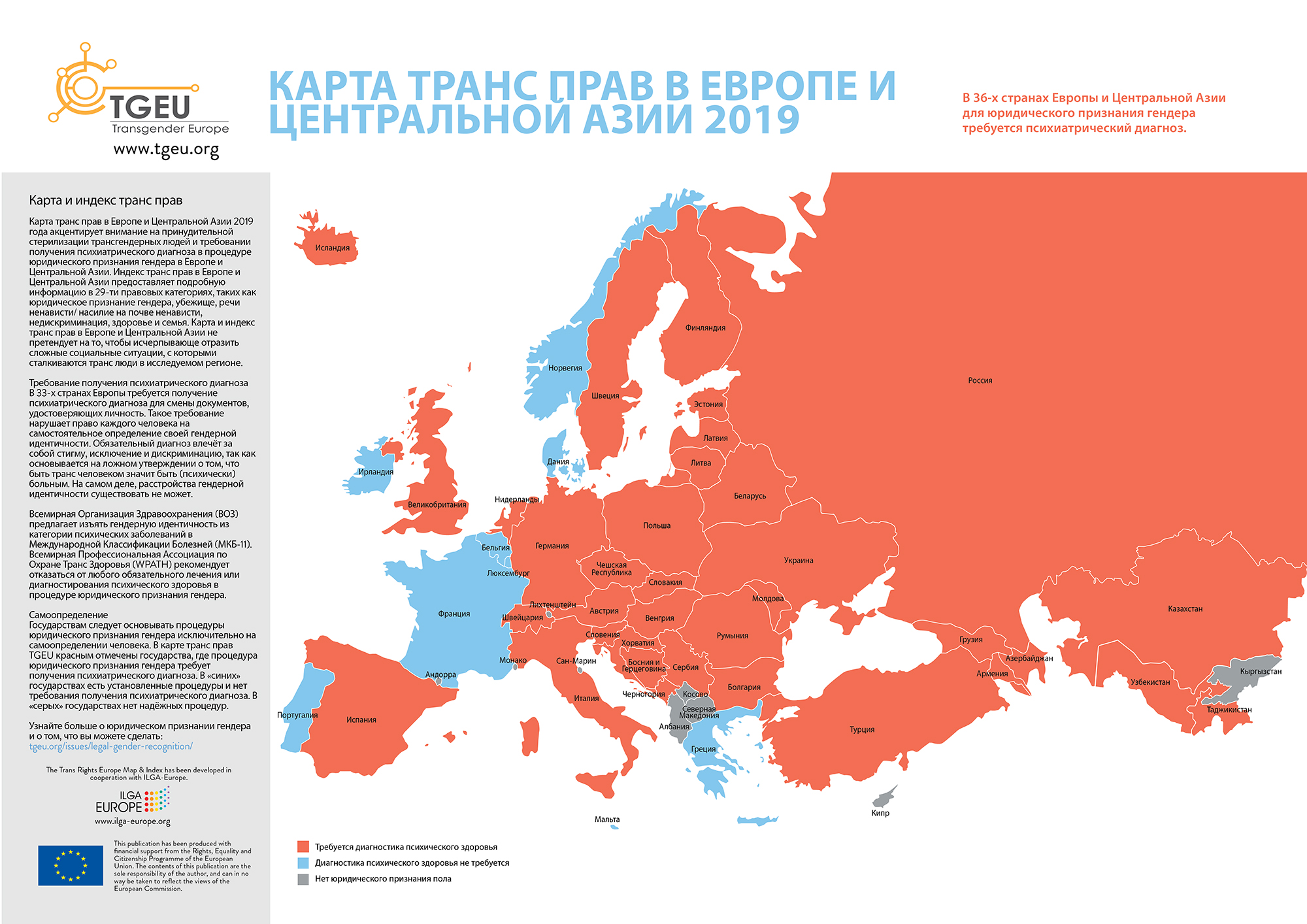 Such a requirement violates the right of every person to self-determine their gender identity. A mandatory diagnosis further drives stigma, exclusion and discrimination as it relies on the false notion that being trans is a (mental) illness. In fact, no gender identity is disordered.

The World Health Organisation (WHO) proposes to stop categorising gender identities as mental illnesses in the International Classification of Diseases (ICD-11). The World Professional Association for Transgender Health (WPATH) advises against any mandatory mental health treatment or diagnosis in legal gender recognition.

States should base legal gender recognition procedures solely on the self-determination of the person.

Learn more about legal gender recognition and what you can do improve it. 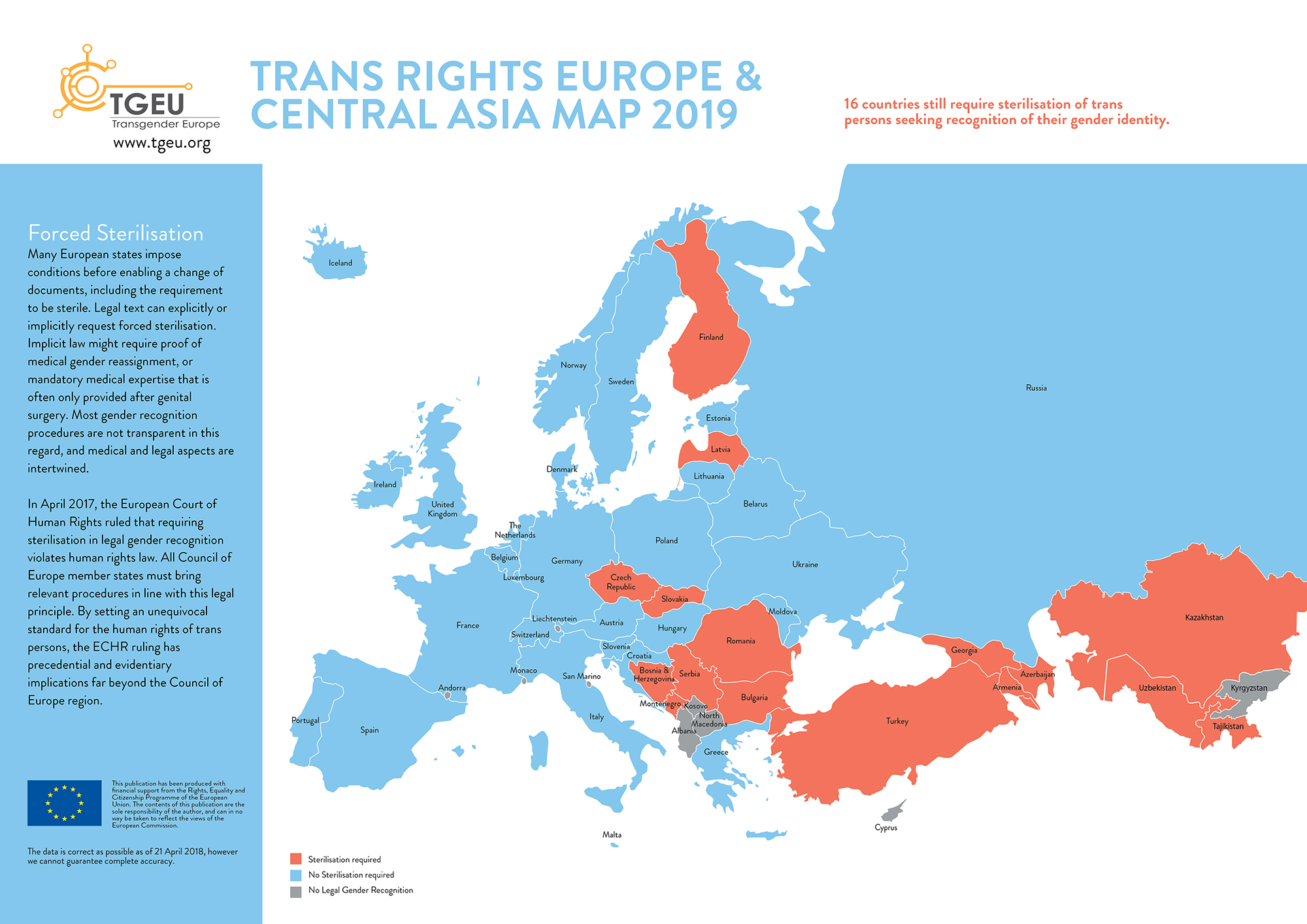 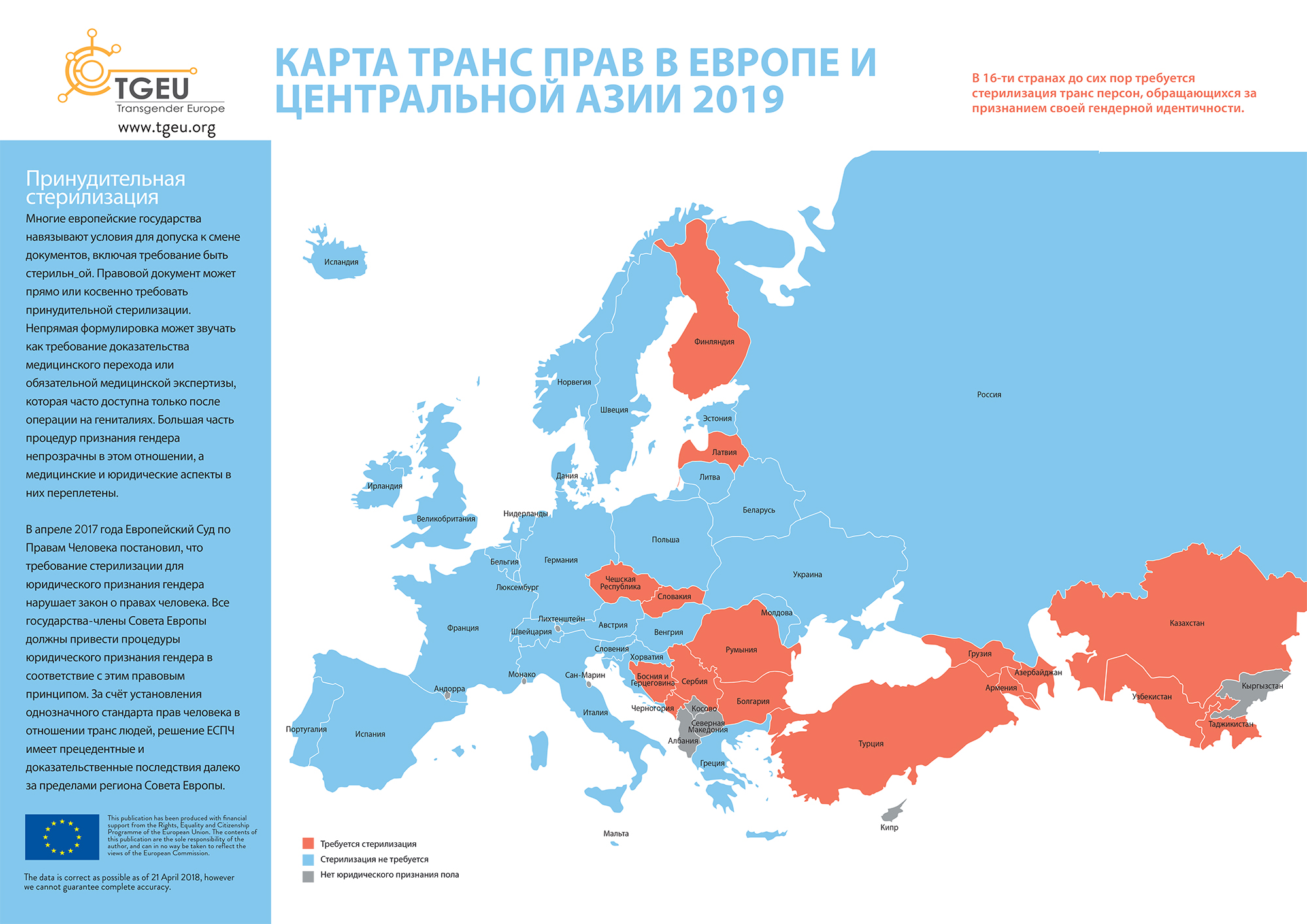 Many states impose conditions before enabling a change of documents, including the requirement to be sterile. Legal text can explicitly or implicitly request forced sterilisation. Implicit law might require proof of medical gender reassignment, or mandatory medical expertise that is often only provided after genital surgery. Most gender recognition procedures are not transparent in this regard, and medical and legal aspects are intertwined.

In April 2017, the European Court of Human Rights ruled that requiring sterilisation in legal gender recognition violates human rights law. All Council of Europe member states must bring relevant procedures in line with this legal principle. By setting an unequivocal standard for the human rights of trans persons, the ECHR ruling has precedential and evidentiary implications beyond the Council of Europe region. 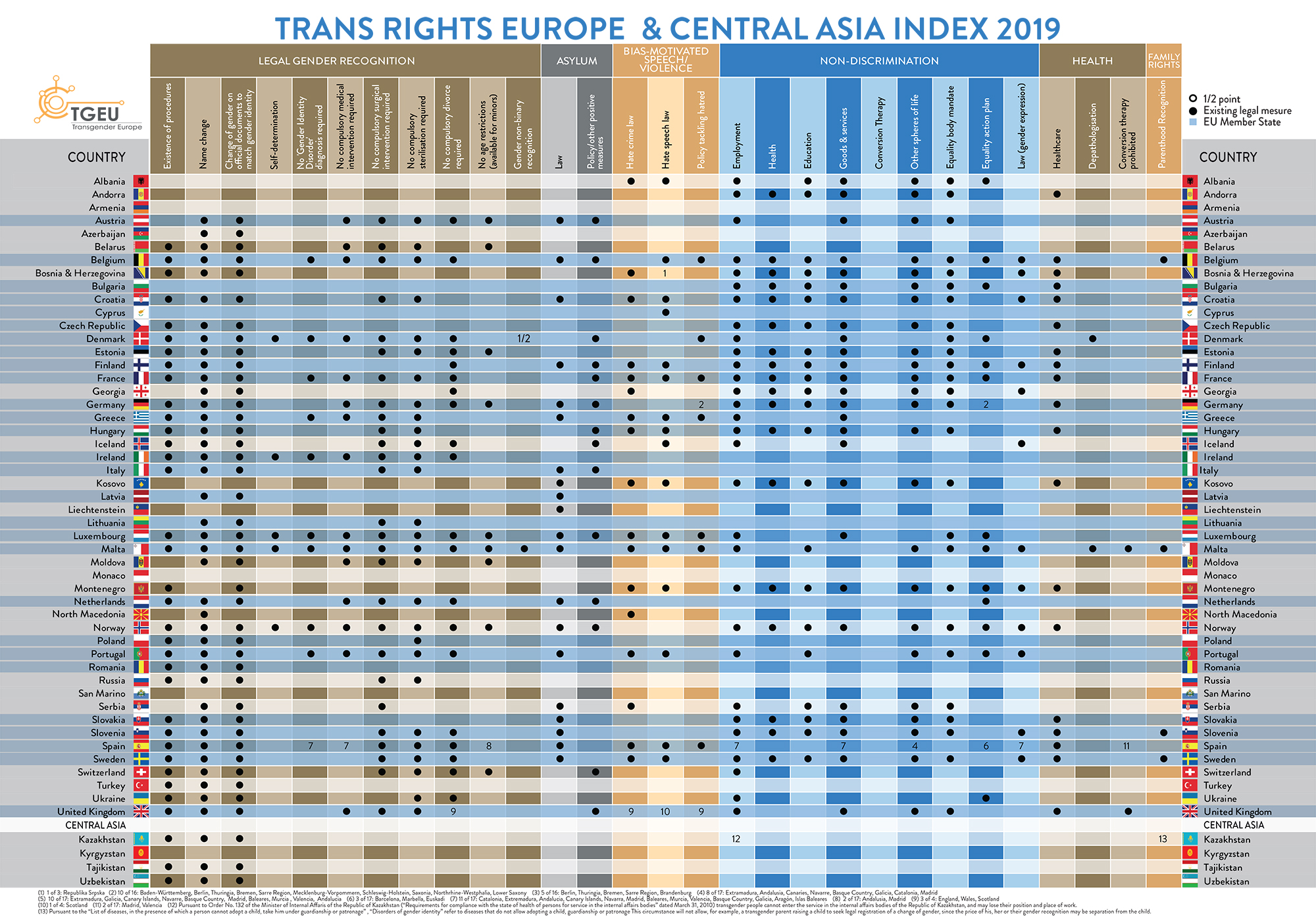 Identity documents that are in line with a person’s gender identity are  important for trans people’s dignity, safety and access to human rights.

Such procedures exist in 42 of the 53 reviewed countries.

Out of the reviewed countries:

Data provided is as correct as possible on 30 April 2019, however, we cannot guarantee complete accuracy.

The Trans Rights Europe Map & Index 2019 has been produced with financial support from the Rights, Equality and Citizenship Programme of the European Union. The contents of this publication are the sole responsibility of Transgender Europe, and can in no way be taken to reflect the views of the European Commission.