German parliamentarians have paved the way for the introduction of a third gender marker. On December 14 both chambers, Bundestag and Bundesrat, agreed to a law proposal that will introduce “diverse” (German: divers) as gender marker entry in addition to “male” and “female”. Basis for such an entry will be a medical certificate, which can be waved only in exceptional cases. Trans persons with a non-binary gender identity will remain excluded. The prohibition of genital-mutilating surgeries in intersex infants has not effectively been outlawed either. It shall be taken up in 2019, together with a reform of the Transsexual Law.

TGEU welcomes the introduction of “diverse” as an alternative to male and female but criticises the requirements. 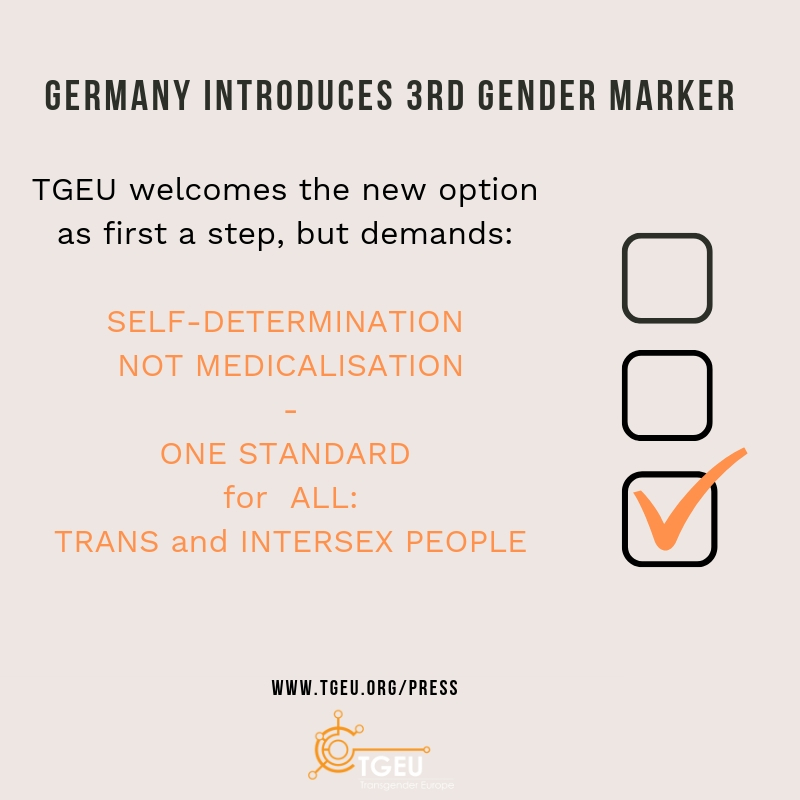 “Any change of gender marker needs to be based on self-determination. Trans and intersex communities have been suffering for too long from the hands of doctors. This needs to stop. The law needs to protect against human rights violations and not invite new abuse.” Comments Dinah Bons, TGEU Strategic Director.

The World Health Organisation had declared in June 2018 that trans identities are not defined any longer as mental disorders.

“Holding on to medical certificates instead of ensuring that every person has the right to self-identification shows a gross lack of understanding of the seriousness of the human rights violations trans and intersex people face.” adds Richard Köhler, TGEU Senior Policy Officer:

“Gender identity is one of the most intimate part of a person’s private life, an area that needs high standards of protection against any interference from the state. More and more people come out identifying as neither male or female. They are failed with this half-baked initiative.”

TGEU demands from German lawmakers to use the opportunity of reforming the Transsexual Law in 2019 and create one human rights compatible standard for anyone who needs a change in gender marker.

“European standards are very clear in this regard. Procedures have to be quick, transparent, accessible and based on self-determination. Germany has missed the goal this time. It should not miss it the next time round.” Dinah Bons adds.

OII Europe, together with TGEU, had commented on an earlier version of the draft from the Ministry of Interior, criticising the proposal as othering intersex people (the proposal had foreseen “other” (German: “anders”) as name of the new gender category) and that it would codify in law that intersex people continue to be medicalised.

The current legal initiative was triggered after the German Constitutional Court had demanded from lawmakers the introduction of a “positive” gender denotation, besides male and female. The campaign group Dritte Option had brought the case.