“As a non-binary trans person [..] I could not receive treatment in a GIU (Gender Identity Unit) because I felt forced to lie and pretend to be a binary trans man, and this in my case would be unfeasible because what I’m doing is a low hormone treatment dose to reach only a certain level of changes and when changes have taken place I will lower the dose. Conventional professionals would most likely not respect this type of process and pressure me to accept a binary transition pack or to remain without treatment.”
Non-binary person, age 34, Spain

About the Trans Health Survey

Together, our goal was to provide a deeper understanding of the healthcare situation of trans people in Europe. To gain this understanding we conducted the survey in five countries; Georgia, Poland, Serbia, Spain, and Sweden.

“I’ve been going to doctors in (…) trying to get permission for sex change, but I have a feeling that they are not too interested to help me – they don’t provide me with adequate psychological support, actually they still misgender me, and every session comes down to them attempting to give me medication against depression and anxiety, though I’ve been telling them that the cause of those problems is basically unavailability of the treatment I’ve been waiting for.”
Trans man, age 22, Serbia

After a period of data gathering in 2016 we had results from 885 healthcare users, and 888 healthcare providers.

“The healthcare from psychologists in the Gender Identity Treatment Unit was not only unhelpful, it was also humiliating and degrading. There is inadequate information about treatments and surgeries, and authoritarian, paternalistic and pathological attitudes abound.”
Trans woman, age 22, Spain 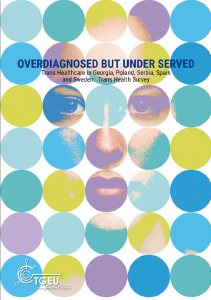 If you want to reference this work, please use the following citation:
Transgender Europe, Overdiagnosed but Underserved, 2017

Use the hashtags #transhealthcare #transhealth to reference the project on Twitter. If you would like to use some of these images; just right-click to save them. 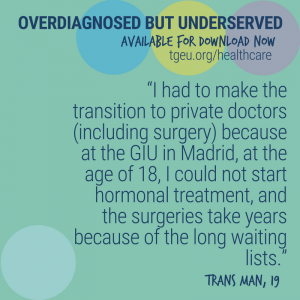 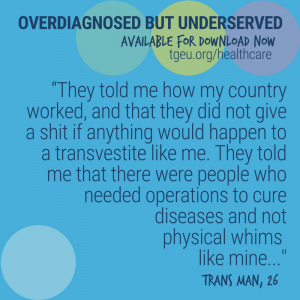 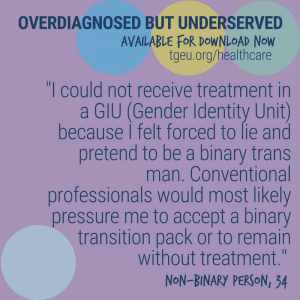 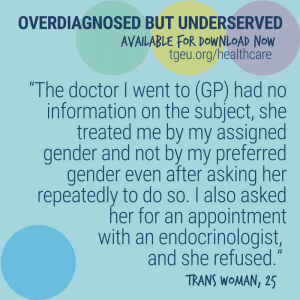 You are free to share (copy, distribute and transmit the work) and to remix – that is to adapt – this work, as long as you attribute the work in the manner specified by the authors (but not in any way that suggests that they endorse your or your use of the work) and do not use this work for commercial purposes. If you alter, transform, or build upon this work, you may distribute the resulting work only under the same or similar license to this one.