TGEU welcomes the intention expressed by the Spanish Government of passing a gender identity law that will regulate the legal gender recognition of trans people in the country and protect them from discrimination.

The draft law currently being discussed would allow access to legal gender recognition to trans people all over the country on the basis of self-determination. In the last few years, several regions in Spain have already approved laws that set examples of good practice in Europe and beyond for being based on the principle of self-determination.

The proposed change means that trans people will finally be entitled to their own gender, that they are trusted, and recognised by the State. Trans people will stop having to undergo long, invasive, and pathologising processes, and will be able to lead lives that are in line with who they really are. 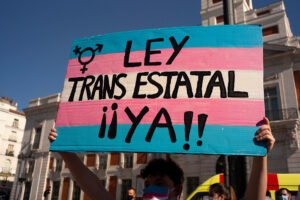 It is urgent that the rights of trans people in Spain are recognised and fully in line with human rights standards as acknowledged by International and European institutions. In doing so, Spain would become the tenth European country that legislates in favour of trans people’s self-determination and leaves behind pathologising requirements. Over the years, these countries have shown the positive impact this legislation has had, both for trans people and for society as a whole.

Although the bill rightly includes trans minors, it still excludes parts of the trans community. Despite the EU Agency for Fundamental Rights (FRA) finding in its LGBTI Survey II (2019) that 62% of trans respondents have a gender identity that falls outside the gender binary, the proposed law does not recognise non-binary identities. The current initiative only allows for the possibility to leave the gender marker blank in certain documents, while having to reflect a binary gender in their birth certificate and other official documents.

Non-binary movements in Spain are demanding the option to choose between a third gender marker or to leave it blank in all documents. Migrant people, regardless of their status, should be allowed to change their gender marker in any documentation issued in Spain under the same conditions of self-determination. Additional barriers included in the draft law, such as providing proof that legal gender recognition is impossible in their country of origin, either legally or in practice, constitute a form of discrimination.

TGEU urges the Spanish government to approve a law that respects the self-determination of all trans people, including minors, non-binary people, and migrant communities.