The Court reasoned that the legislator has different options on how to eliminate the constitutional violations, such as waiving the mandatory entry of gender in registries, or offering a different option besides male or female.

“We welcome this ground-breaking judgement as a beacon of hope for anyone outside the norms of sex and gender in Germany and Europe. There are more than two genders and sexes. It is high time to recognise the rights of every person not identifying as exclusively male or female, regardless of their sex characteristics. These individuals are particularly vulnerable to violence, discrimination and inequalities in a system that only knows ‘male’ or ‘female’.”

The legislator should act swiftly now and overhaul an archaic system of registering something as personal and intimate as gender/sex. We welcome the Court’s suggested option to waive the mandatory gender entry completely. If a gender entry is needed at all, it should be voluntary and based on self-determination of the person.” 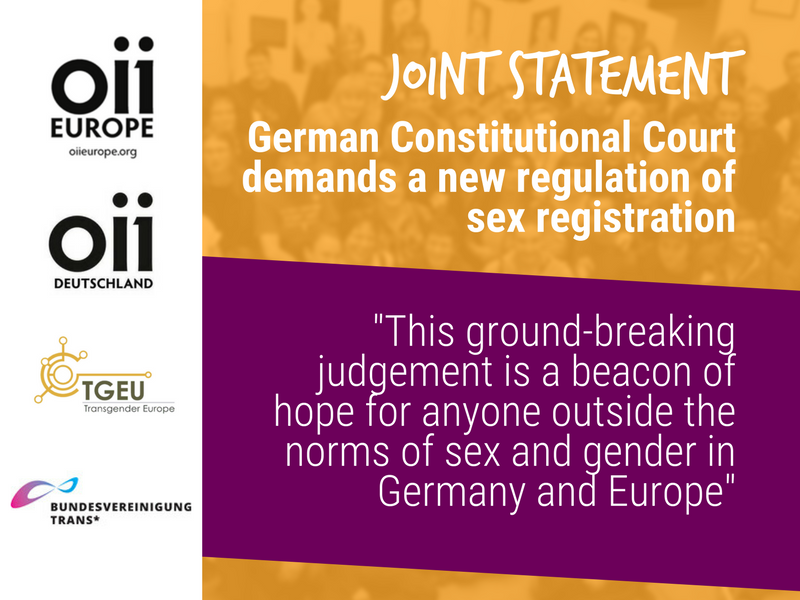 Facts of the Case:

The complainant applied to the competent registry office for the correction of their birth record to the extent that the previous gender “female” should be deleted and the indication “inter / divers”, in the alternative only “divers” should be registered. The advocacy group Third Option (Dritte Option) has been supporting the case throughout the last five years.

Reasoning of the Court

The Court reasoned that the gender identity is a constituent aspect of a person’s personality. While the law requires a gender entry, it did not allow the complainant to choose an entry that matches their gender identity. The legal option of leaving the entry blank would also not suffice as the person does not understand themself as sexless, but has a gender identity beyond male and female. The denial of recognition of a non-binary gender identity does endanger the constitutionally protected free personality development.

According to the Court, the current set up is constitutionally unjustified. The Basic Law does not require that the gender entry in the civil status has to be regulated exclusively in the binary. It does neither require that sex is a normative part of the civil status, nor does it preclude the recognition of another gender identity beyond male or female. By simply opening the possibility of another entry nobody is forced to associate with this wider gender.