» International Day of Action for Trans Depathologisation » “I need depath because…”

For World Health Day 2018, trans people told us why depathologisation (depath) matters to them.

“I felt questioned and challenged. For almost two years I had to constantly give proof about my gender in front of total strangers.” Trans female, 47, Germany

“I didn’t even go to the gender identity clinic, I knew I wouldn’t pass their tests… genderqueer, no classic childhood trans stories, and not even sure if I wanted to medically transition. Why did I have to lie to be myself? ” Trans masculine genderqueer person, 27, Spain

“The requirement to be officially diagnosed has made me so scared about accessing hormones, mental health support, speech therapy, or any other service that could greatly contribute towards improving the quality of my life.” Non-binary person, 26, United Kingdom

“The psychiatric nurse asked me questions about what I wanted; I was honest. Because I didn’t give the gold star transgender answers of liking blue and playing with trucks as a kid, she questioned whether I really wanted to be a man.” Trans man, 29, Norway

What’s more, in TGEU’s Survey, published last year: Overdiagnosed but Underserved, Trans Healthcare in Georgia, Poland, Serbia, Spain, and Sweden, 88% of healthcare providers agree that being trans is not a psychiatric disorder.

Use the hashtag #INeedDepathBecause to add your voice to the on-going campaign for depathologisation. Follow the conversation on World Health Day on Twitter: #WorldHealthDay #HealthForAll 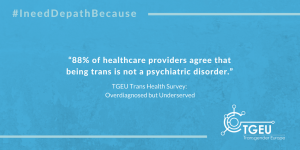 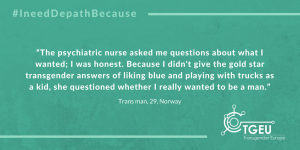 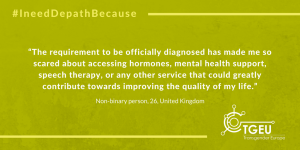 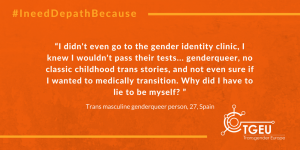 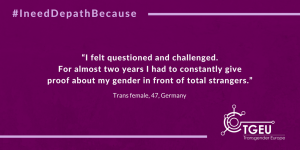 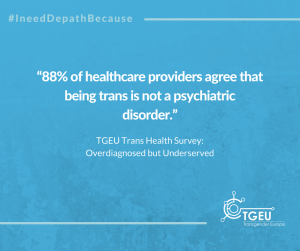 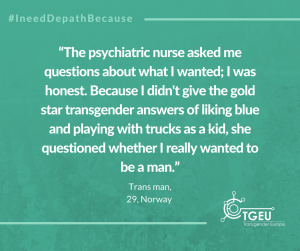 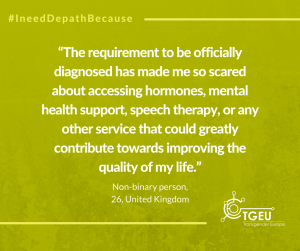 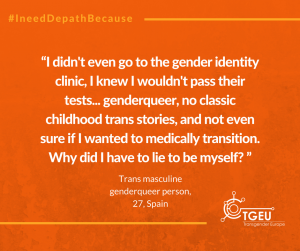 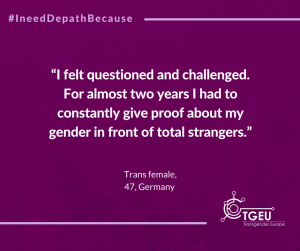 Statement on the International Day of Action for Trans Depathologization 2017