On the occasion of the International Day Against Homophobia, Biphobia, and Transphobia 2022, TGEU is launching the latest version of the Trans Rights Map in English, Russian, and Spanish.

TGEU’s Trans Rights Map illustrates the legal situation of 49 countries in Europe and 5 in Central Asia in matters of trans-specific legislation. It shows country-specific requirements for legal gender recognition1 as well as existing protections for trans people in asylum, hate crime/speech, non-discrimination, health, and family.

This year, the map registers slow progress, after no significant advancements in 2021. Despite the pandemic, an ongoing attack on human rights, and a devastating war in our region, trans activists and their allies achieved 23 positive developments. Unfortunately, there has also been regression in six areas, with governments allowing policies on asylum, bias-motivated speech/violence, and equality to expire without being renewed.

Nevertheless, it is not a time to be complacent. An aggressive, well-financed, and well-organised conservative backlash took up much needed community resources to push for a regress in trans rights. The war in Ukraine is impacting the economy, democracy, and human rights in the region and deeply touching the lives of trans people in the country. TGEU’s research shows that COVID-19 keeps pushing poor and homeless trans people and others to the margins of society.

During the pandemic, civil society activists again picked up where governments and mainstream service providers failed in order to accommodate the needs of trans and LGBTI people. It is against this background that we applaud the progress achieved by trans communities already stretched thin.

Governments must take considerable action to ensure progress in the future. Trans people urge their governments to urgently invest in better legal protection and recognition. This must focus on those further marginalised by racism, poverty, sexism, ableism, xenophobia, and other forms of oppression. Prioritising human rights education and celebrating diversity benefits everyone.

In a hurry? Check out our Fast Facts in English, Russian, or Spanish. 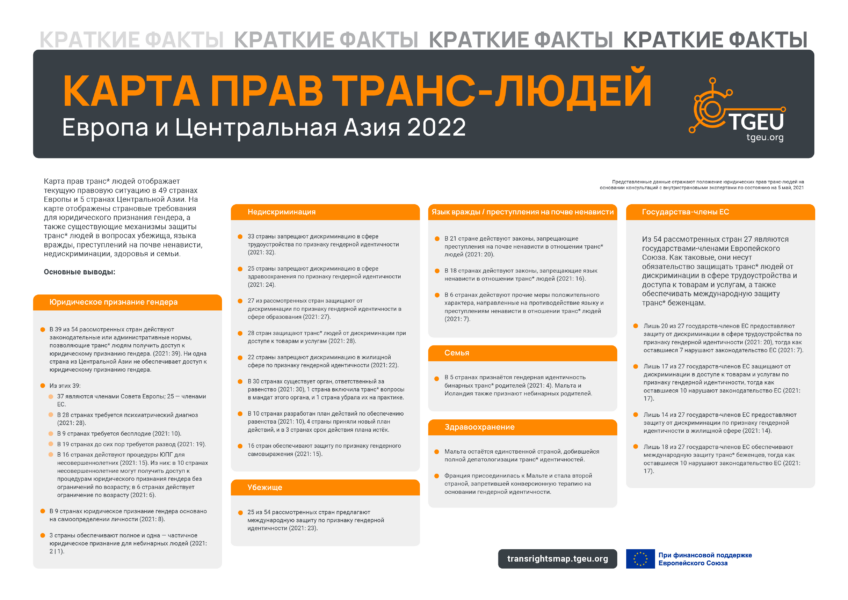 1 Legal Gender Recognition (LGR) is the official recognition of a person’s gender identity, including gender marker and names, in public registries and key documents. International standards require LGR to be quick, transparent, accessible, and based on self-determination. LGR is fundamental for many trans people to live a life with dignity and respect.

The data presented reflects the legal rights of trans people based on consultation from in-country experts as of 5 May 2022. The Trans Rights Map documents existing explicit legal protections governments are granting (or denying) trans people. It does not claim to exhaustively portray the complex realities of trans people’s lives.

We would like to thank the 240 country experts who shared their knowledge and expertise with TGEU.

The Trans Rights Map is developed in cooperation with ILGA-Europe.

The interactive Trans Rights Map was designed and developed by Wolfox Studio.